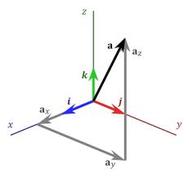 Newton's second law of motion states the "every action has an equal an opposite reaction."  That is, every force (a vector quantity with magnitude and direction) has an equal and opposite force.

Check out the youtube videos below to see Newton's 2nd law in action!!!

1.   HW Solutions CH. 14
2.  14I NOTES on the DOT PRODUCT
3.  Check out these KHAN ACADEMY videos on the vector dot and cross product.
4.  CROSS PRODUCT power point from class
5.  a)  VECTOR REVIEW/CHALLENGE
b)  VECTOR REVIEW/CHALLENGE SOLUTIONS   Note:  For vector cross products you do NOT need to know how to use matrices.  It will suffice to use the IB formula. (see your booklet)
c)  Vector Review/challenge (My worked solutions)